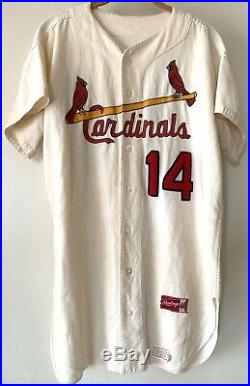 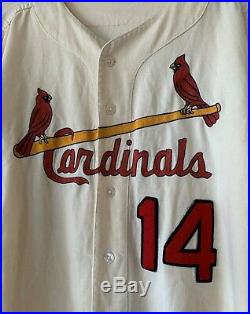 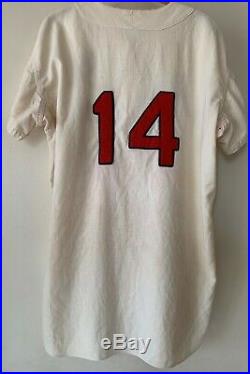 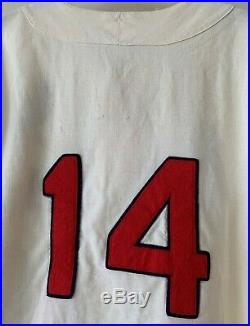 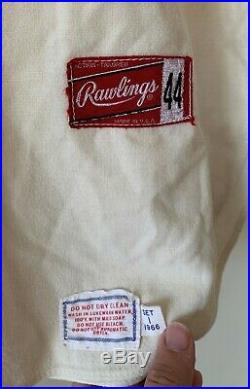 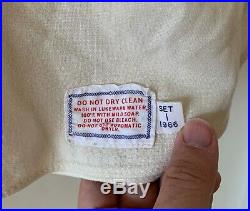 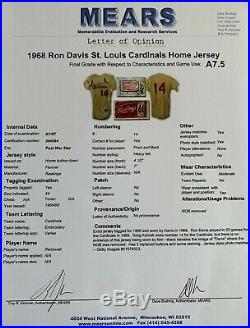 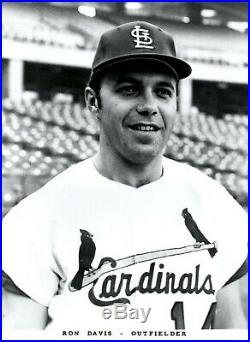 Worn by Ron Davis. Offered for sale is a rare flannel baseball jersey with the original Birds on the Bat embroidered onto the front, along with the Original #14 sewn on the front and the back of the jersey. This jersey was made in 1966 as identified by the 1966 year tag that is attached to the wash tag. DAVIS name on back has been removed (most likely when it was sent down to the minor leagues, much like all of the flannel jerseys back in those days), but you can easily make out the name when the jersey is held up to the light. The jersey was worn by Ron Davis. Louis Cardinals in 1968 when the Cardinals went to the World Series. Davis only played for the Cardinals in 1968, so this jersey was most likely a jersey the Cardinals had laying around since’66 that nobody had used, and when Davis joined the team in 1968, that’s when his name and number where sewn onto the jersey. MEARS has authenticated this jersey and have assigned it a grade of A7.5. The jersey was subtracted 2.5 points on the MEARS grading scale because of some stains on the jersey (probably because it was game used), a replaced button, and because of the Name on Back missing (much like all of the flannel jerseys prior to 1970). This old flannel jersey is in great condition, with some wear here and there that you would expect for a jersey that’s over 50 years old. While Davis isn’t a household name, this jersey would make an incredible display piece for any Cards fan. Please feel free to message me if you have any questions. The item “1966-1968 St. Louis Cardinals Game Worn and Used Home Flannel Jersey Ron Davis” is in sale since Tuesday, August 20, 2019. This item is in the category “Sports Mem, Cards & Fan Shop\Game Used Memorabilia\Baseball-MLB\Jerseys”. The seller is “mlheller76″ and is located in New York, New York. This item can be shipped to United States, Canada, United Kingdom, Denmark, Romania, Slovakia, Bulgaria, Czech republic, Finland, Hungary, Latvia, Lithuania, Malta, Estonia, Australia, Greece, Portugal, Cyprus, Slovenia, Japan, China, Sweden, South Korea, Indonesia, Taiwan, South africa, Thailand, Belgium, France, Hong Kong, Ireland, Netherlands, Poland, Spain, Italy, Germany, Austria, Bahamas, Israel, Mexico, New Zealand, Singapore, Switzerland, Norway, Saudi arabia, Ukraine, United arab emirates, Qatar, Kuwait, Bahrain, Croatia, Malaysia, Brazil, Colombia, Panama, Jamaica, Barbados, Bangladesh, Bermuda, Brunei darussalam, Bolivia, Ecuador, Egypt, French guiana, Guernsey, Gibraltar, Guadeloupe, Iceland, Jersey, Jordan, Cambodia, Cayman islands, Liechtenstein, Sri lanka, Luxembourg, Monaco, Macao, Martinique, Maldives, Nicaragua, Oman, Peru, Pakistan, Paraguay, Reunion, Viet nam, Uruguay.