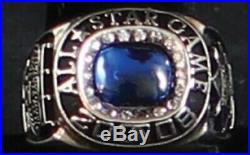 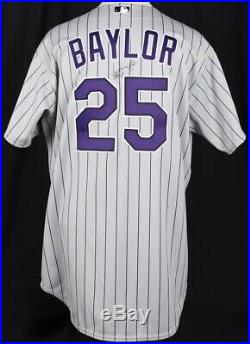 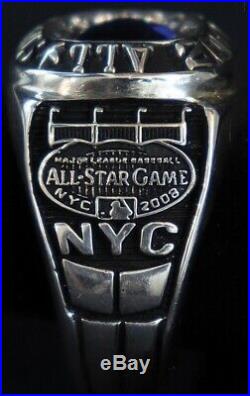 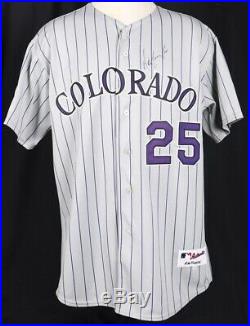 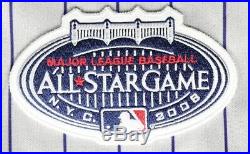 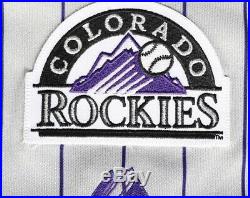 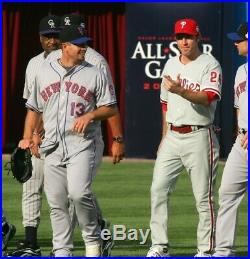 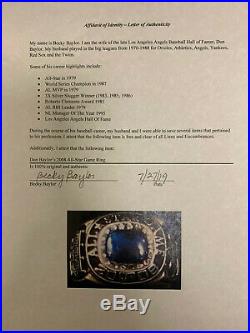 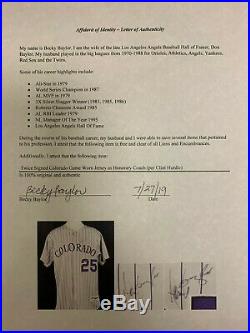 Don Baylors 2008 All-Star Game Ring & Twice Signed Colorado Game Worn Jersey as Honorary Coach (per Clint Hurdle) Becky Baylor Signed LOA & Both Don Baylor Autographs PSA Pre-Certified. The 2008 All-Star Game was hosted by old Yankee Stadium for the final time. Indeed, Bud Selig appropriately picked Yankee Stadium to host the 2008 mid-summer event in lieu of its pending destruction whereby a new Stadium would be erected for the 2009 season. It literally appeared as if “The House That Ruth Built” did not want to see our National Pastime’s legends leave its hollowed grounds, with the American league claiming a 15 inning 4-3 victory in a seemingly infinite-like 4 hours & 50-minutes record setting game. For that revered game, the National League manager, Clint Hurdle, chose the ultra-popular Don Baylor to be one of his honorary coaches, with Baylor donning his Colorado Rockies pinstriped uniform. Offered here in a single lot are BOTH the Baylor game worn jersey from this classic event as well as his 2008 All-Star ring with extensive descriptions as follows. A brilliant synthetic “sapphire blue” stone is affixed in the center with 18 round diamonds set around the somewhat oval sapphire. Encompassing the ring of diamonds is the following raised text “ALL-STAR GAME – 2008″ with an MLB Logo situated in the middle of “2008”. The right-side shank portrays the classic National League Logo, and the opposite left shank reveals an imposing Yankee Stadium Façade design and the accompanying verbiage: “MAJOR LEAGUE BASEBALL ALL-STAR GAME NYC 2008″ as well as an extremely large “NYC” near the lower region. The inner band reflects an “STERL” engraving that stands as ironclad authenticity for its silver pedigree, and while a few light stray scratches and minimal wear exist, its condition conservatively ranges in the NM+ range. #25 GAME WORN COLORADO ROCKIES PINSTRIPE JERSEY A “one of a kind” heirloom, this #25 Colorado Rockies pinstripe jersey was only worn by Baylor for the 2008 mid-summer classic and has been scripted “Don Baylor” on BOTH the front and back in bold black sharpie. The super eye pleasing purple hues have not faded at all, with the bold #25 and “BAYLOR” stitching completely intact on both sides. Presenting itself in NM/MT condition, Baylor’s autograph on the front is situated above the “COLORADO” team name and his second script on the verso is affixed between his revered name and #25. The authentic logos include: (1) the official 2008 MLB All-Star Game Insignia w/an elaborate Yankee Stadium Façade design; (2) the standard MLB Authentic Logo from Majestic Athletic including Baylor’s #52 size; and (3) the official Colorado Rockies patch. All three logos as well as the critical LOA from Becky Baylor stand as ironclad authenticity for its 2008 Mid-Summer classic “game worn” stature. Both the ring and jersey stand as additional testaments to Baylor’s popularity with Rockies manager Clint Hurdle who was overwhelmingly privileged to have selected him as “Honorary Coach” for this ultra-special match. The fourth and final All-Star game played at the iconic Yankee Stadium originally built in 1923, baseball could not have selected a more fitting venue for the renowned Mid-Summer classic! – LOAs from Becky Baylor. The item “Don Baylors 2008 All-Star Game Ring & Twice Signed Colorado Game Worn Jersey” is in sale since Tuesday, October 8, 2019. This item is in the category “Sports Mem, Cards & Fan Shop\Game Used Memorabilia\Baseball-MLB\Jerseys”. The seller is “osssasbaylor” and is located in Arlington, Virginia. This item can be shipped worldwide.