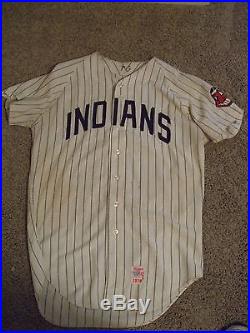 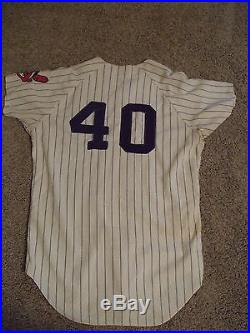 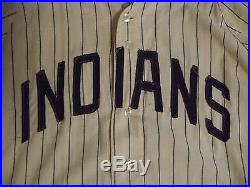 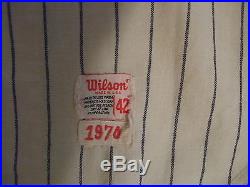 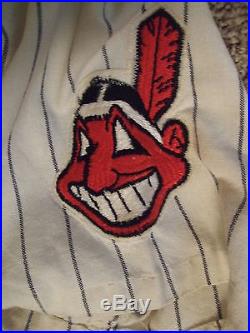 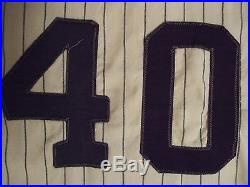 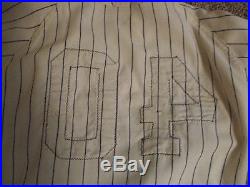 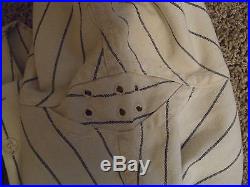 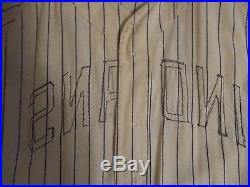 This is a vintage all original 1970 and 1971 game worn jersey of Ken Hawk Harrelson. Ken wore this jersey during the 1970 campaign, when the Indians changed lettering in 1971 The Indians redid the Uniform from the 3d version in 1970 to the Black lettering. This Jersey was alterted by in Indians in 1971. It shows great wear with all proper tagging. This a a rare style. Ken played for four teams: the Kansas City Athletics (196366, 1967), Washington Senators (196667), Boston Red Sox (196769), and Cleveland Indians (196971). In his nine-season career, Harrelson was a. 239 hitter with 131 home runs and 421 RBI in 900 games. On April 19, 1969, Harrelson was traded to the Indians, a move that shocked him and led him to briefly retire. Following conversations with commissioner Bowie Kuhn and a contract adjustment by Cleveland, Harrelson reported to the team, finishing the year with 30 home runs. He also used his local celebrity status to briefly host a half-hour TV show, “The Hawk’s Nest” on local CBS affiliate, WJW-TV. Harrelson was very popular in Cleveland, with his autobiography coming out around the time of the trade to the Indians. Stories of his time as an Indian are chronicled in the book “Portrait of a Franchise: An Intimate Look at Cleveland Indians Baseball During the Rockin’ Sixties” by Doug Kurkul. During spring training the following year, Harrelson suffered a broken leg while sliding into second base during a March 19 exhibition game against the Oakland Athletics. The injury kept him on the sidelines for much of the season. When Indians rookie Chris Chambliss took over the first base position in 1971, Harrelson retired midseason to pursue a professional golf career. The item “1970 1971 Ken Hawk Harrelson Cleveland Indians Game Used Worn Jersey Uniform” is in sale since Saturday, March 12, 2016. This item is in the category “Sports Mem, Cards & Fan Shop\Game Used Memorabilia\Baseball-MLB\Jerseys”. The seller is “1234stlouis” and is located in O’Fallon, Missouri. This item can be shipped to United States, to Canada, to United Kingdom, DK, RO, SK, BG, CZ, FI, HU, LV, LT, MT, EE, to Australia, GR, PT, CY, SI, to Japan, to China, SE, KR, ID, to Taiwan, ZA, TH, to Belgium, to France, to Hong Kong, to Ireland, to Netherlands, PL, to Spain, to Italy, to Germany, to Austria, RU, IL, to Mexico, to New Zealand, SG, to Switzerland, NO, SA, UA, AE, QA, KW, BH, HR, MY, TR, BR, CL, CO, CR, PA, TT, GT, HN, JM.